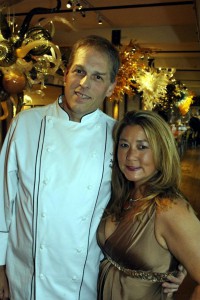 It wasn’t until Don was nearing graduation from the University of Minnesota, where he studied accounting, that he decided to trade in his calculator for a sauté pan. His passion for cooking was sparked at the age of five when his Sicilian mother began to teach him traditional Italian family recipes. Ultimately, he realized that the kitchen was his calling and worked through the ranks at Hotel Sofitel, where he was trained in classic French cuisine.

Don began his Northwest culinary adventure in 1994 as Executive Chef at Al Boccalino. He went on to serve as Opening Chef of Andaluca where he received acclaim as “one of America’s most innovative chefs” by Wine Spectator. At Assaggio his loyal fan base continued to grow. In 1999, Don took over the kitchen at the newly renovated, Prego Ristorante and Italian Cooking and Living named him “One of America’s Top 26 Chefs.” Most recently, Don served as Chef Partner of Il Fornaio and then lived in Europe during 2004, gaining inspiration for Volterra.

For the duration of his 20-year career, Don has been dedicated to serving what local vendors have to offer, from fish and seafood to fruits and vegetables grown by small farmers to boutique cheeses and cured meats. Throughout his culinary successes, Don Curtiss has inspired excellence in his team members. He has instilled a passion for innovation along with regard for tradition in his staff. Curtiss is realizing his longtime culinary dream with the opening of Volterra with his wife Michelle.

Awards and Recognition for Don Curtiss

Named one of the “Top 40 Executives Under 40” and “Woman of Influence” by the Puget Sound Business Journal, Michelle’s expertise in business and passion for fine food and spirits brings discipline and enthusiasm to Volterra. For the past 20 years, she has been involved in the start up of emerging growth companies in the Seattle area, including the Experience Music Project (“EMP”). As Controller of EMP, Michelle was responsible for overseeing the financial operations of the $240 million project. Quisenberry has continued her role as an international accounting consultant in addition to handling all financial aspects of Volterra and overseeing Marketing and Public Relations. She also serves as Board President of the Seattle International Film Festival (SIFF).


"Paid parking" in garage under building.
Free parking on the street and at the Kirkland Public Library.

Dine-in or Take Out